Circulating nutrients with fish – something old or something new?

On April 6th 2017, Finnish company Kesko launched a new product, Pirkka Saaristolaiskalapihvi, a fish steak made of bream. Ok, one might think – a fish product, what’s so special about it?

The fish used for the product is caught from the Archipelago Sea by the fishermen recruited by NutriTrade Pilot Fish. Bream has been considered as “trash fish” in Finland for decades – since the 1970’s bream has lost its commercial value and from the 1980’s until today, the Finns have been used to in eating mostly rainbow trout and Norwegian salmon. The new product, Pirkka Saaristolaiskalapihvi, is the first commercial product in Finland made of bream. 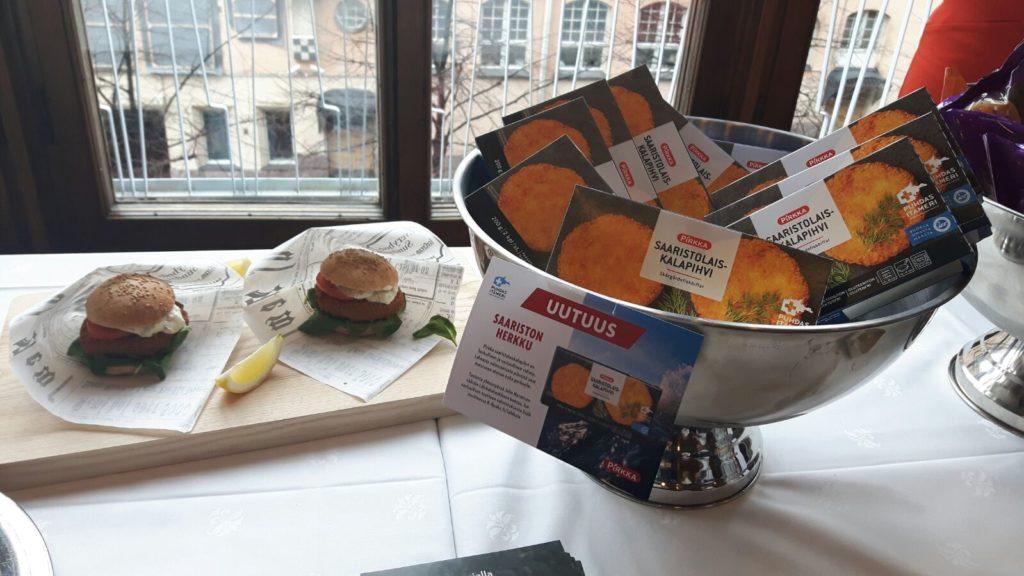 There are plenty of bream in Finnish coastal waters and in the Archipelago Sea, and fishermen have even been constantly throwing these fish back to the sea from their traps. Once caught, throwing these delicious and healthy, low-fatty fish back to the sea seemed a waste of resource. In Pilot Fish, a local commercial value chain was first built up in cooperation with small-scale companies utilizing the fish for human food. Cooperation was also built with Arkea Oy, a company delivering food to schools in Turku region.

Fishermen who fish the bream are recruited annually through an open call in the Archipelago Sea area. The project started with 5 fishermen, but due to the increased demand the amount has been increased to 15 fishermen fishing for the project this year. The total catch during the whole project is approximately 300 000 kg so far, which amounts to 2,5 tons of phosphorus (P) removed from the sea ecosystem. And this is where the added values come in – as bream is a commercially low-valued fish, the stocks in coastal waters are large and underutilized. Increasing the utilization of this resource not only removes nutrients from the sea but also circulates them back into use on land as sustainable human food.

Every ton of nutrients (P) that is not left in the sea to feed the mass occurrences of blue-green algae is a good thing. To give an example on scales, commercial and free-time fishing altogether remove nearly 700 tons of P from Finnish water bodies annually. Utilizing local resources circulates the nutrients within region, whereas bringing nutrients outside the local system, for example in the form of fertilizers or food itself, increases the amount of excess nutrients ending up into the local watercourses and the Baltic Sea. Therefore, the traditional livelihood of fishing can also be seen as a cost-efficient way of implementing circular economy in practice – when carried out sustainably, of course. In NutriTrade Pilot Fish, only bream and roach (cyprinids) are being caught and all predatory or migratory fish are released from traps back to the sea.

There are still several bottlenecks on the way of bream becoming a mainstream product, from image to the price of production and from weather conditions to the seasonality of catches. However, these challenges are not insurmountable – just some work still needs to be done. Currently, despite the challenges, the route for the bream from the sea to our plates seems promising, and the Finnish consumers have warmly welcomed this easy, sustainable and healthy dish. Consequently, the target of the work in Pilot Fish is no less than creating opportunities for a value chain that could become economically sustainable and could continue its operation also after the project lifetime.

The journey of the bream from the Archipelago Sea to our plates hasn’t been too easy, but we hope for a great success for bream products – a delicious way of circulating nutrients and mitigating the eutrophication of the Baltic Sea!

NutriTrade Pilot Fish (Local Fish Project) is supporting the targets of sustainable circular economy by advancing the utilization of the cyprinid fish from the Archipelago Sea as human food. The Pilot has been selected as one of the pilot examples of the sustainable food systems in SITRA’s “Finnish road map to a circular economy”, that highlights best practices and pilots that are easy to duplicate and provide added value on a national level.