Last week, on 15 March, NutriTrade project arranged a side-event to introduce gypsum application of agricultural fields as a new and cost-effective water protection measure. The side-event was part of the 3rd BONUS Symposium “Sustainable ecosystem governance under changing climate and land use in the Baltic Sea region” held in Gdansk, Poland, on 14-16 March 2018. The conference and the side event took place at the European Solidarity Centre. In the side-event there were 15 participants from several countries around the Baltic Sea region representing various research fields (e.g. soil science, economics and policy). All in all, there were approximately 120 registered participants in the three-day conference.

The side-event introduced gypsum application of agricultural fields as a new, cost-efficient water protection measure. The Finnish pilot and its preliminary results were presented, and the audience was encouraged to discuss about further research and also piloting the method elsewhere in the Baltic Sea.

The first speaker, Professor Markku Ollikainen from the University of Helsinki, introduced the promising new measure. He explained how gypsum application, unlike the many currently used agricultural water protection measures, reduces both particulate and dissolved phosphorus loads. Also, the method does not require taking land out of cultivation or reduce yield either. Compared to other methods, it is more effective and cheaper. From a farmer’s point of view, it is also a simple and easy method.

Prof. Ollikainen introduced the gypsum application pilot project, which started in Southwest Finland in 2016. The pilot has provided a lot of information and knowledge about the practical implementation of the method. Information about farmers’ experiences during the pilot and their attitudes towards the method has been gathered. The effect of the method on water quality and its safety for aquatic biota has been monitored as well.

Prof. Ollikainen reflected the results from the pilot: if gypsum application were commonly used as a water protection measure in Finland, the BSAP targets for phosphorus reduction could be cost-effectively achieved by this single method. Because of the highly promising results of the gypsum application in reducing agricultural phosphorus loads to the Baltic Sea, the potential of the method should be considered also in the other Baltic Sea countries, for example in Sweden, Denmark and Poland. 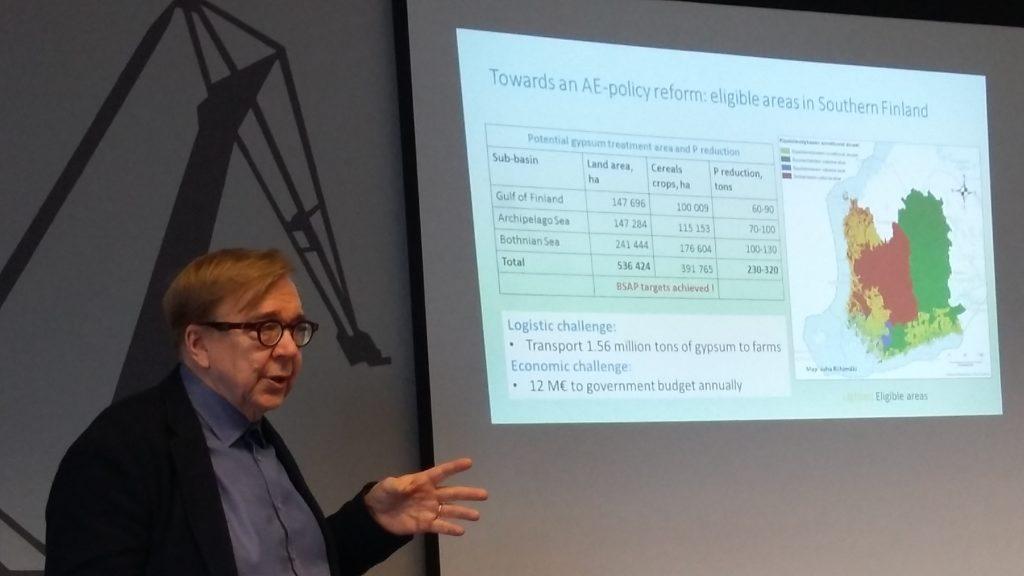 Senior scientist Petri Ekholm from the Finnish Environment Institute continued by discussing the chemistry and environmental impacts of gypsum. He started by explaining what gypsum does in soil. After its application on soil, gypsum dissolves quickly into calcium and sulphate ions. This increases the ionic strength of the soil and creates larger aggregates of the clay particles, which prevents erosion and loss of particulate and dissolved phosphorus.

Then Dr. Ekholm presented how gypsum application impacts the water quality. In the pilot project the water quality was monitored at a scale of a river catchment area with continuous, automatic measurements and manual sampling. According to the preliminary results, gypsum application has reduced markedly the loss of particulate phosphorus (40-50%), as well as dissolved organic carbon from the fields that were treated with gypsum in autumn 2016. The results for dissolved phosphorus are not yet available, but according to previous research, the reduction can be up to 30%. In addition, possible negative side-effects of the sulphate of gypsum on the ecology in the river and fields were studied. According to the results this far, any harmful effects have not been observed. 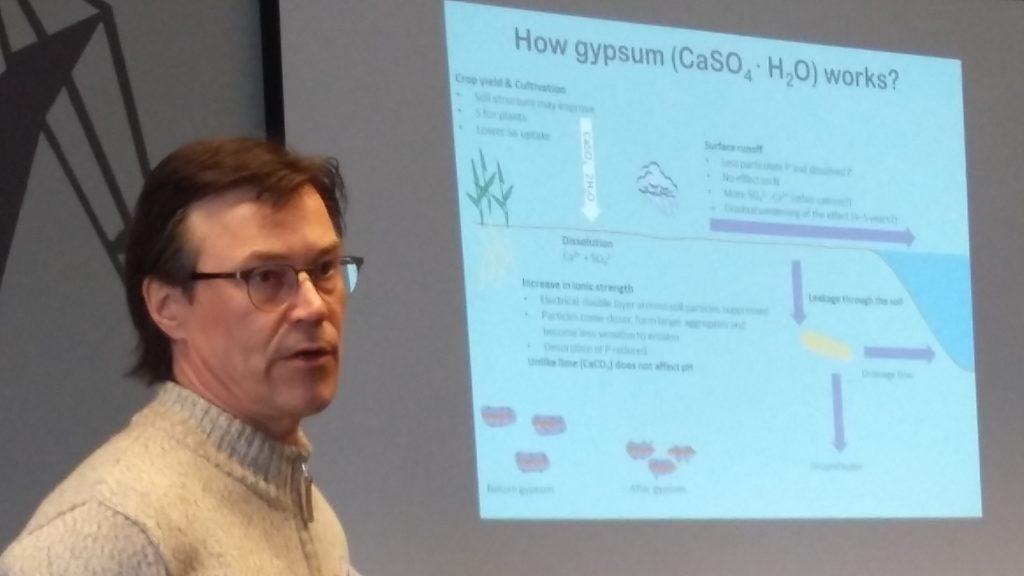 The third speaker, Project coordinator Eliisa Punttila from University of Helsinki brought up the research history of the gypsum application in Finland. In the beginning the innovation was based only on theory, which was then tested by simple filtration experiments. After several tests and studies both at laboratory and on field, gypsum application was regarded as a promising method also for extensive use. This enabled the large-scale gypsum pilot in Southwest Finland in autumn 2016. Ms. Punttila also presented how the pilot project was organized in practice. She listed what issues should be considered in order to test gypsum application also elsewhere in the Baltic Sea region. The key issues are the suitability of gypsum for different soil types as well as the local availability of pure gypsum, free of any hazardous substances. From the experiences gathered in Finland it is known that gypsum is suitable and works effectively in clay soils. Ms. Punttila underlined that although gypsum is globally well available (gypsum as by-product from industrial processes, FGD gypsum from energy plants, mined natural gypsum and recycled gypsum), the safety of gypsum must be confirmed before the use in agriculture. 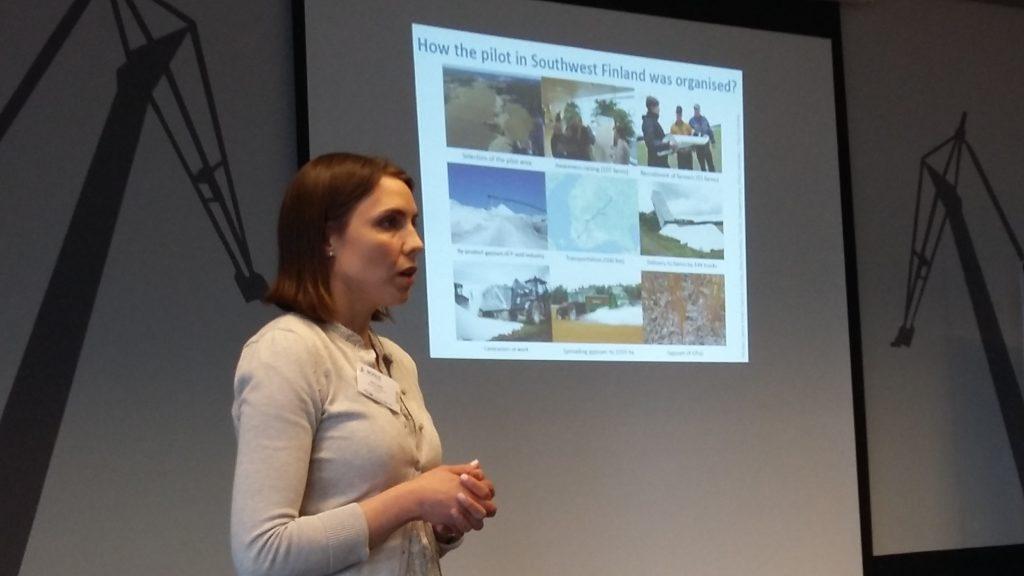 There were many questions from the audience. Audience wanted to learn more about the Finnish soils for a background for the presented results and experiences. Senior scientist Risto Uusitalo from Natural Research Institute Finland told that clay concentration in Finland is typically between 30% and 40%, and pH between 6 and 6.5. Soil scientists from Poland brought up that there is lack of soil sulphur in Poland. It was commented that the same problem was noted also in the pilot, and gypsum application provided additional benefit at certain parcels. An economist wanted to hear, how gypsum application corresponds to other water protection methods, especially those which focus on erosion prevention. Professor Ollikainen answered that gypsum application can be easily combined with different measures. However, he pointed out that gypsum application is special due to dissolved organic phosphorus reduction, providing a benefit that is not gained from other measures. From the audience it was also suggested, if the timing of the application could be somehow optimized in order to prevent sulphate peaks to water courses. 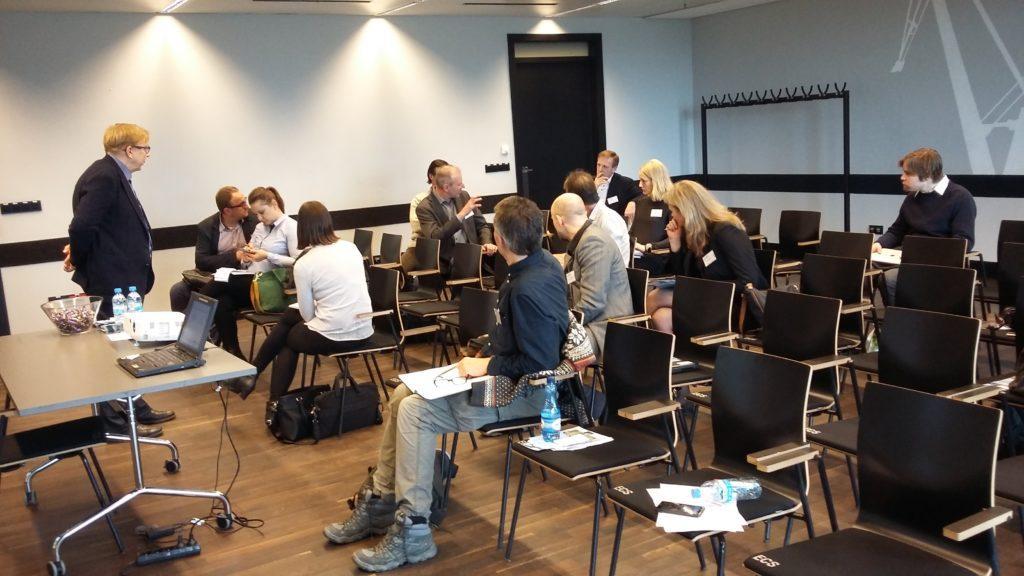 Gypsum application raised a lot of discussion among the participants