Project NutriTrade has been active in raising awareness about the idea of nutrient offsetting. In nutrient offsetting, an individual, company, country, etc., reduces its nutrient discharges through the funding of activities that improve the environment.

In total four Finnish water companies have accepted the challenge to neutralize their nutrient discharges. The first one to take action was Helsinki (more precisely the City of Helsinki and HSY, Helsinki Region Environmental Services Authority), who decided to offset the wastewater phosphorus discharges of Viikinmäki treatment plant by funding the treatment of wastewaters in Vitebsk, Belarus.

By doing this, Helsinki becomes the first city of the Baltic Sea area that is phosphorus neutral in terms of its municipal wastewaters.

Since then, three other Finnish cities and water companies have followed suit: Kotka and Kymen Vesi Oy, Porvoon vesi, and Turun seudun puhdistamo Oy. They decided to finance various nutrient reduction projects in Finland, Russia and Belarus with a sum with which the reduction of P discharges is equal to their annual discharges to the Baltic Sea.

As responsible organisations, these cities and companies are willing to go beyond their regulatory requirements. This is why the result is true reductions in nutrient loading to the Baltic Sea.

In August, the directors of two first forerunner water companies (Tommi Fred, HSY and Jani Väkevä, Kymen Vesi Oy) were given a surprise prize (note the cute toilet bowls!) for their pioneering action in nutrient offsetting. 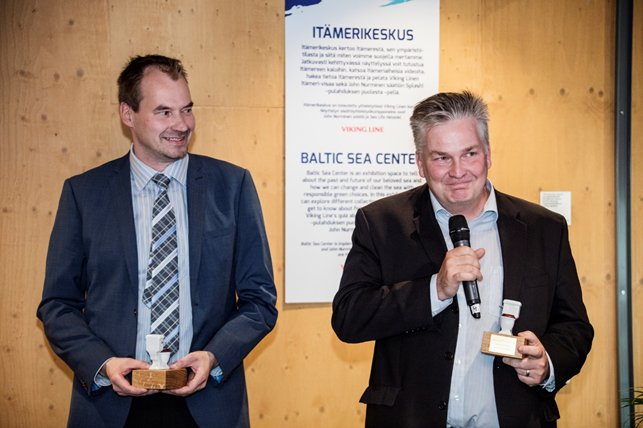