Low-hanging fruits and where to find them

In February 2017, researchers from Denmark, Sweden and Finland joined Swedish national and regional decision makers in Stockholm for a one-day workshop on the eutrophication of the Baltic Sea. The topic: are there still significant ‘low-hanging fruits’, that is, untapped low-cost ways to improve the environmental state of the Baltic? And if so, how can this potential be exploited?

The ‘external load’ of excess nutrients leaking into the Baltic has fallen in recent years. But the state of the sea has not yet responded as strongly as one might have hoped, so more remains to be done. All the more important, according to some workshop participants, to pursue policy instruments capable of picking the low-hanging fruits that remain.

The workshop was framed around eutrophication management in Sweden. Is current Swedish policy well equipped to pursue cost-effective measures? What scope for improvement is there? 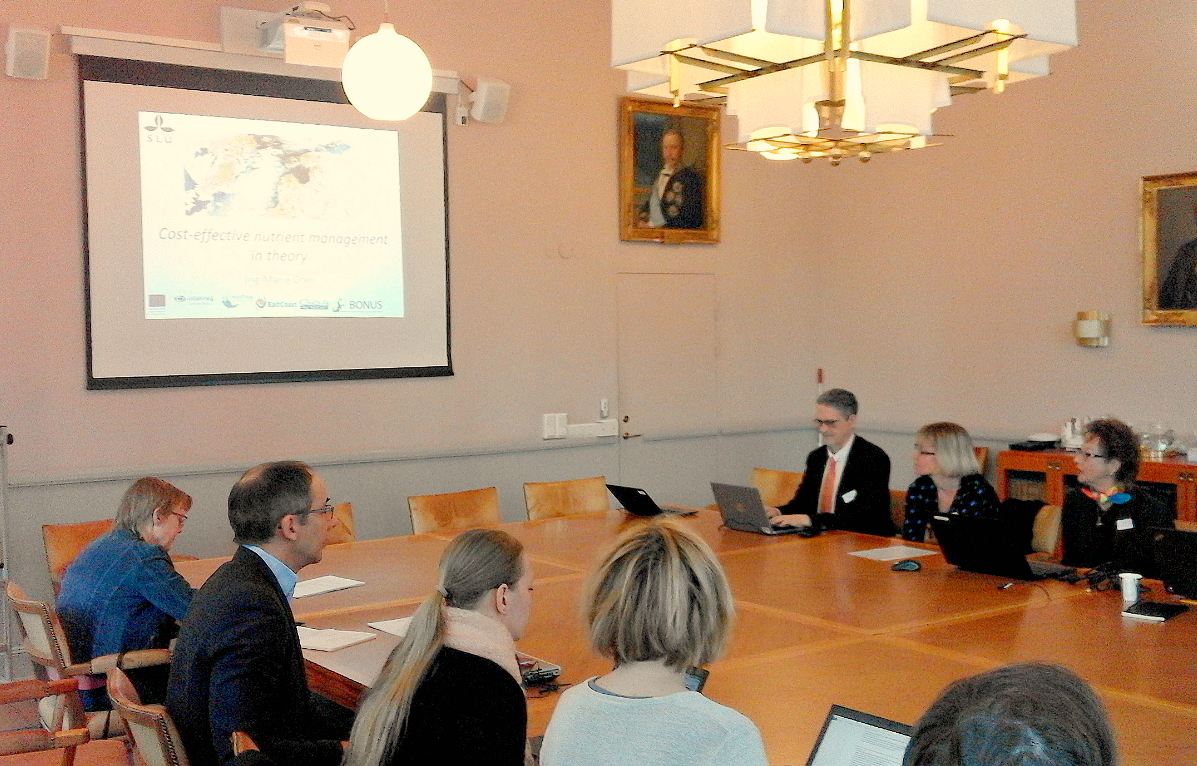 One of the presentations held at the workshop. Photo: Andris Andrusaitis, BONUS EEIG

Have Swedish policies been cost-effective?

There are two major sectors causing Swedish phosphorus leakage to the Baltic Sea: municipal wastewater treatment plants and agriculture. Over the past decades, ambitious measures to reduce phosphorus leakage from the former have been driven by a combination of legislation and permit approval processes. In fact, in many places, there is little technical potential to reduce loads further. As for the latter, the Swedish government has strived to address eutrophication without impairing farmers’ bottom line. Various subsidies are available within the Swedish Rural Development Program for those willing to take action for the environment. There is also the “Focus on nutrients” initiative, a collaboration involving the Swedish Board of Agriculture and the Federation of Swedish Farmers. This ongoing project aims to inform farmers about low- or even negative-cost measures, so as to find possible win-win solutions.

Unfortunately, it is not clear that these policies and measures have all been cost-effective. In fact, several participants at the workshop argued that one should not expect regulatory policies such as those used for Swedish wastewater treatment plants to produce cost-effective results on the ground. The reason is simple: for this to happen, regulators would need to know which measures are low-cost and which are not – but this information is typically not available. Similarly, relying on farmers’ voluntary participation comes with some risk: what if the farms that apply for subsidies are the “wrong” ones, that is, the ones where measures are expensive?

One presentation in particular seemed to confirm that these concerns are valid, showing that the mix of measures taken in Sweden between 1995 and 2005 was in fact a long way off from achieving the Baltic Sea Action Plan targets in a cost-effective way.

The potential for low-cost nutrient measures

Where then might the remaining low-cost measures be found? The NutriTrade project is currently exploring the effectiveness and cost of some innovative measures. Within agriculture, there is Pilot Gypsum, which looks at reducing nutrient runoff by applying gypsum to fields. Another promising avenue is to remove nutrients directly from the Baltic Sea, as NutriTrade is doing within Pilot Mussel and Pilot Fish. A different possibility altogether is that the truly low-hanging fruits are to be found outside Scandinavia. Traditionally, most environmental economists have found that there is a great deal of potential for low-cost measures in Poland, but even these low-hanging fruits may now be about to be “picked” by the Polish authorities. One may have to go further abroad, to Belarus, to find any remaining low-cost measures.

“Where are the remaining low-hanging fruits?” Some participants felt that this was in fact not the right way to approach the issue. Perhaps the point is not for regulators and experts to find out which measures are cost-effective: maybe the way forward is rather to provide the right economic incentives for municipalities, farmers, and fisheries to find – and pick – those low-hanging fruits themselves. This is because standard economic arguments suggest that once such an incentive is in place, only the cheapest measures will be implemented, whatever and wherever they are. And then the point about where to find the low-hanging fruits is moot.

One way to provide such an incentive would be to introduce some type of emissions trading system. For example, as an alternative to reducing their own emissions, wastewater treatment plants could be allowed to meet stricter demands by paying farmers to take measures on their land. Such policies have been used to some success in the United States and other countries, and might deliver substantial cost savings even if implemented only within Sweden. Suggestions for a Swedish emissions trading system have been put forward several times, including by the Swedish Environmental Protection Agency, but no policy proposal has so far gotten off the ground.

Much of the workshop, in fact, was spent discussing the details of how emissions trading or other economic instruments would work in practice. For example, the impact on the Baltic Sea from nutrient runoff typically differs depending on where the leakage happens. Because of this, “taking measures at least cost” may be a different thing from “cleaning up the Baltic at least cost”, and policies should, and could, be modified to account for this.