The effect of gypsum on agricultural phosphorus losses: the first results from the Savijoki pilot

The Savijoki River – An excellent site for agri-environmental research

The Savijoki River meanders across an agricultural landscape in the southwestern Finland. During rainy seasons and snow-melt periods its flow drastically increases and the water becomes turbid due to erosion of clayey soils in the catchment; its Finnish name literally stands for a clay river. According to the typology of surface waters, Savijoki belongs to medium-sized rivers in regions with clay soils and its ecological state is only passable. The river is a tributary of the Aurajoki River, which discharges into the Archipelago Sea (the Baltic Sea) suffering from severe nutrient enrichment and eutrophication.

The upper reaches of the Savijoki River have formed an agricultural research basin from as early as the 1960s and hydrological and water quality data collected from the area have been reported in numerous research papers. In addition, the river has been the target of several advisory projects on agricultural loading. Today, it serves as the site of an exceptionally large pilot study, where gypsum amendment is being tested as a means to reduce the load of eutrophying phosphorus entering the Archipelago Sea. The Savijoki is ideal for such a pilot due to its size and to the facts that most of the fields are located on clayey soils, there are no lakes in the catchment and the characteristics of the area are well-known.

The Savijoki is literally monitored 24/7

In the autumn 2016, gypsum was spread on the fields located in the middle reaches of the Savijoki. The upper reaches were left as a control area, where gypsum was not used. In this way, the long-term water quality trends from the site were not disrupted.The monitoring of runoff quality in the control area is based on an existing monitoring programme, as somewhat amended for our specific needs. It relies on the use of continuous online sensors and manual water sampling. The sensors record e.g. the turbidity and electrical conductivity of water on an hourly basis, while much less frequently taken manual water samples are analysed in the laboratory for a large repertoire of variables reflecting all aspect of water quality. Hourly runoff volume, i.e.water flow, is obtained from the automatic water level recordings at a measuring weir. 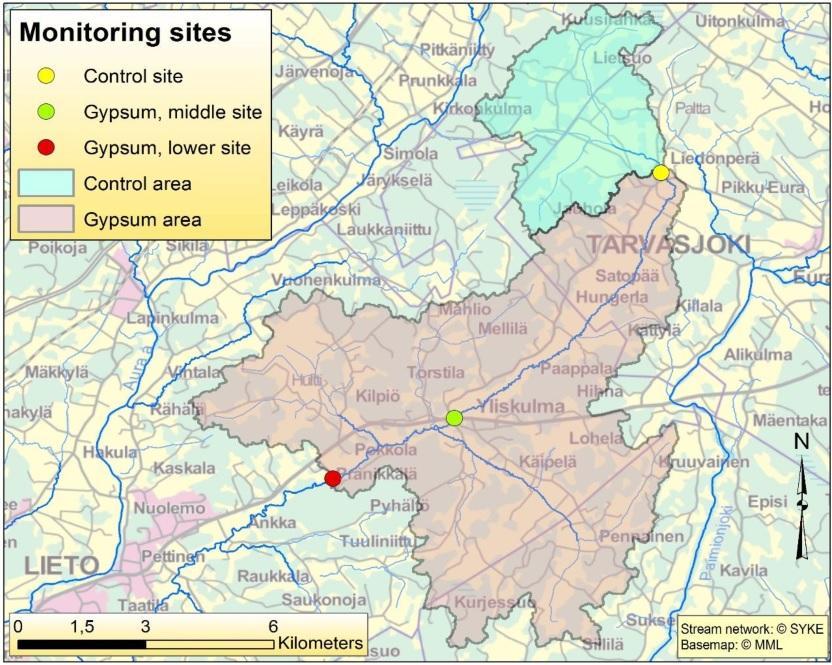 Figure 1. The treatment area, the control area, and the three monitoring sites along the Savijoki river.

There were no existing monitoring programmes in the treatment area. Thus, we selected two sites in the middle reaches of the river (Table 1, Fig. 1), which were instrumented similarly as the upper reaches, except for the measurement of runoff volume. So far, we have assumed the specific runoff (in mm) to be the same in the treatment area as in the control area. However, as water level is recorded at both gypsum sites, local runoff will be obtained in the future for these sites, too, when we have performed a sufficient amount of instantaneous runoff measurements to build a water level – runoff curve.

Table 1. Characteristics of the Savijoki sub-catchments

The first results are promising

To examine the pre-gypsum situation, the monitoring at all the three sites started in February 2016. Because the snow cover was thin and the spring relatively dry, there were only moderate runoff peaks in the river, which lowers the evidence somewhat. According to the pre-gypsum data, turbidity and the concentration of particulate phosphorus were slightly higher in the treatment area than in the control area,although both areas are rather similar in their field percentage, soil type and other known load generating factors. The level of dissolved phosphorus was about the same at all three sites.

The autumn was also dry, even exceptionally so. The dry weather was perfect for the spreading of gypsum, but disappointing when it comes to estimating the effects on phosphorus losses. The runoff from fields was practically non-existent in September and October, which made it impossible to draw any conclusions. The situation was made worse by the cold front in November, which suggested that winter had come.

The “winter” did not last for long and on the 19th of November snow-melt water, with an extra input from the sky, began to increase the flow in the river. The eagerly awaited first results on the runoff quality were however disturbing: the turbidity of runoff was higher in the gypsum area than in the control area. Luckily such a situation turned out to be momentary and was possibly formed by the soil particles settled on the river bottom during the long dry period and detached by the rapidly flowing water. Soon a promising pattern emerged: in contrast to the pre-gypsum situation, turbidity was clearly the highest in the control area, where no gypsum was used, lower in the middle site of the gypsum area and the lowest in the lower site of the gypsum area. The next runoff peak, although smaller, took place during the Christmas, repeating the above pattern.

In clayey catchments, turbidity of water describes the concentration of soil particles that are eroded from the fields. The lower turbidity values in the gypsum area thus reflect the fact that the fields amended with gypsum have been less sensitive to erosion than the untreated fields, as expected from earlier studies and theoretical considerations. Fewer particles in the water may be beneficial for the ecology of the river itself and the recipient sea. However, the main aim of the gypsum amendment was to minimise the transport of phosphorus from fields to eutrophic coastal waters of the Archipelago Sea. The manual water quality monitoring performed in the Savijoki showed that there is a strong and linear correlation between turbidity and the concentration of particulate, soil-bound phosphorus in the water. Therefore, the results from the two runoff events strongly suggest that gypsum had, indeed, reduced the load of particulate phosphorus.

Sulfate from gypsum is gradually flushed away

Concomitant with the reduced turbidity there was an increase in electrical conductivity of water. Manual water samples confirmed that this increase was mainly due to elevated concentrations of calcium and sulfate, i.e. part of the gypsum spread on the fields had been flushed away with runoff. Future monitoring will reveal how long the beneficial effect of gypsum on phosphorus load will last. This duration can be related to the flushing of gypsum, as calculated from the conductivity of runoff. In theory, the concentrations of phosphorus in the river should increase back to their original level with gradual flushing of gypsum, unless gypsum permanently improves soil structure.

The sulfate losses form a potentially adverse side effect of gypsum. Sulfate is harmful for standing freshwater bodies, since it can reduce the ability of bottom sediments to capture phosphorus. In brackish and marine systems no such problem exists as they are inherently rich in sulfate. The Savijoki was selected as a pilot site, because it contains no lakes and discharges into the brackish Baltic Sea. In high concentrations sulfate may also harm freshwater biota. A survey conducted in the project revealed that the lower reaches of the Savijoki are a home to a population of an endangered mussel species (Unio crassus). To monitor the water quality in the region where these mussels were found, an extra site was founded in the lower reaches of the Savijoki,downstream of the treatment area. This site is visited as often as the other sites for manual water sampling, but due to budgetary reasons no sensors were deployed at the site. The data gathered so far shows that the sulfate concentrations are lower here due to dilution by runoff from downstream catchment not treated with gypsum.

From clay river to a limpid river?

The Savijoki will be monitored till the end of 2018, which allows us to calculate the effect gypsum has exerted on phosphorus losses during more than two years after the gypsum spreading. Moreover, we will monitor the losses of calcium and sulfate to calculate the flushing of gypsum and to check whether gypsum affects the losses of other ions. These estimates will be compared with the ionic composition of soil samples analysed from the fields that have received gypsum and from the control fields. The survey on mussels will be repeated yearly, which makes it possible to estimate potential gypsum impact. At the site with the densest population of Unio crassus, the mussels were marked for a detailed individual inspection of potential damage. In addition, the fish population of the river will be surveyed as well as the key biological variables affecting ecological class of the river. Finally, seven wells will be monitored to examine whether gypsum is leached to ground water. We anticipate that the ecological and ground water effects are rare or non-existent. However, as the gypsum amendment may become a widely used agri-environmental measure in intensively cultivated southern Finland, we want to explore and quantify all the potential side effects.

Our future vision is that the Savijoki, as well as many other similar rivers and streams,will meander across an agricultural landscape much less turbid. The load of eutrophying phosphorus from fields to the Archipelago Sea and to the Gulf of Finland has been reduced and the coastal areas of these two sub-basins of the Baltic Sea have also become less turbid, the turbidity here being caused by proliferating algae.

The impact of gypsum treatment of fields on the water quality of the Savijoki River is monitored by the Finnish Environment Institute within the project SAVE.