In February, around one hundred farmers living in the municipalities of Lieto and Paimio in Southwest Finland were informed for the first time about a large-scale pilot of gypsum application. During the spring they were contacted via letter and phone and also a farmer event was organized in March. Discussions with the farmers revealed that they consider gypsum application as an interesting method. As a result, 60 % of the farmers were willing to participate in the experiment.

The phone interviews were followed by negotiations at farms resulting in 55 agreements comprising 1550 hectares of agricultural land for gypsum application. The gypsum will be transported from Yara’s Siilinjärvi factory directly to the farms during autumn. Farmers will spread the gypsum themselves or use contractors. All costs for the farmers will be covered. 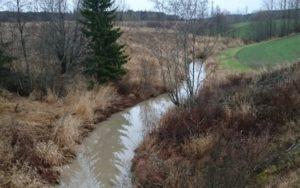 The water quality in river Savijoki will be monitored until 2018 by the Finnish Environment Institute. Continuous and automatic sensors will be used in order to monitor e.g. turbidity and conductivity changes in the river water in the pilot area. The water quality research will be complemented by manual sampling. In addition, impacts on aquatic biota and on soil will be assessed.

This joint project, titled SAVE (Saving the Archipelago Sea with gypsum), between the University of Helsinki and the Finnish Environment Institute has just launched (press release in Finnish and in Swedish attached, web page http://blogs.helsinki.fi/SAVE-kipsihanke).